What an awesome adventure and such a strong message on why we need to be good stewards while in the back country. Enjoy!

A celebration is in order my quest for employment after the military has ended so here is a great little video of the trials and tribulations of dry fly fishing. I kind of relate this to job hunting, just keep making good presentations and eventually you’ll get a take. Enjoy!

For those that eat, sleep and dream about fly fishing here’s a great perspective from a young guide. Enjoy!

We’ve all been there. So far I’ve been skunked in the job hunt as well but have some promising interviews coming up. I really hate job hunting!

It’s been a crazy year looking forward to what the future holds.

Don’t forget to renew your fishing license for 2014.

Some of the pristine beauty of Northern California.

Got a chance to hit the river today. Been super busy the last month putting in job applications and going to interviews. Job hunting sucks! I was on my way home from my most recent interview with the city of Sacramento and I decided to stop by the river and was rewarded by this little guy. 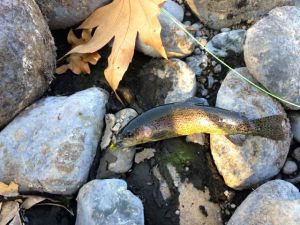 Not Yet Begun To Fight

Thanks to those who serve and have served. God bless you!

On the morning of November 11, 1918, after four years of war, Allied and German powers met in Rethondes, France, to sign an armistice that halted the hostilities of World War I. The agreement went into effect at the 11th hour of the 11th day of the 11th month of 1918, finally bringing to an end the carnage of the Great War — the war thought by many to be the war that would end all wars. History has proved that notion wrong many times and so the holiday was renamed Veterans Day in 1954. This holiday is distinctly different from Memorial Day which commemorates those that have fallen during war. Veterans Day also honors living veterans who have served, or are currently serving in the military of this great nation. So to all who have served, I humbly thank you for ensuring our freedoms.

Today I am thankful for my brothers and sisters in arms! Thank you all for your service and sacrifices on this 11th day of Nov 2013!!!